How to name a range in excel? | Excel Named Range Guide

Naming a range or any cell in excel is a very unique feature. Most of the people, don’t even know this exists. This feature is very uncommon and regarded as pretty pointless.

But in reality, if one if working with large sets of data and uses functions multiple times on a large range, this feature will literally save your time & effort. In this excel tutorial, we’ll see how to use this feature to work with excel range names & already established named range excel.

What is a Named Range in Excel?

Just like you & I have names, excel ranges or even cells can be given different names. If I want to talk to a friend of mine, I would shout his name to get his attention and call him.
Similarly, named ranges or named cells in excel help us to do the same.

Let’s say if I have a data set where I have a range which I frequently use in functions. The range is C2:C11 now every time I want to refer to this range either I have to drag or select first cell, hit SHIFT + DOWN ARROR to select the range.
That’s okay when the range is small, but what if there are multiple ranges & a large data set.

The best way is to use Excel Named Ranges to make the process easier.

You can create a named range in Excel for different data and refer back to this name whenever you want to select this range. Let’s look at the data below: 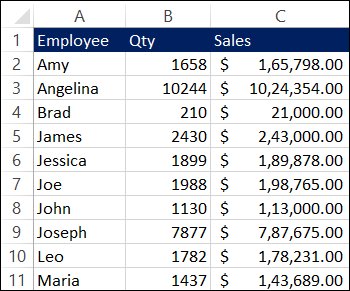 Now I can name these 2 different ranges as ‘Qty’ & ‘Sales’. I can also name a single cell whose value I have to use again & again like a cell containing tax percentage which I can name ‘Tax’.

How to Create a Named Range in Excel

Let’s look at the different methods to create named ranges in excel:

Mostly Name Manager in excel is for working with already defined names. But we can still use it to create new names for ranges too.

Now that we have learned how to name range in excel. Let’s see some golden rules we must follow while creating Named Ranges in Excel.

Let’s say you have created multiple named ranges and now you don’t remember the different names you assigned to each range.

Worry not. Here’s how you can find the names:

Name Manager in Excel is used to manage the assigned names which is to edit, filter and delete names. Let’s see how can use the excel name manager for the same:

How to Edit Named Range Excel

How to Filter Range Names in Excel

How to Delete Named Range in Excel

Shortcuts for Named Ranges in Excel

Let’s see some useful keyboard shortcuts for working with named ranges in excel.

Till now, we have been only working with static Named Ranges. Where the named ranges only refer to the specific range of cells which you have selected.

Say you created a named range ‘Sales’, from a range of cells C2:C11. Then every time you use the excel range name it’ll only refer to cells from C2:C11.
Now you add more data points to cells C12 & C13. For you now the range is C2:C13, but excel doesn’t know this so you have to go back and again redefine the range of cells. So every time you input new data, you have to update named ranges in excel. To deal with this, excel dynamic named ranges are used, which automatically update new data in named ranges in excel.

Let’s see how we can do this, we have to use the Excel INDEX() function. Instead of defining a range of cells we use a formula. This formula automatically gets updated whenever any new data is deleted or added.

A dynamic named range in excel is now created. As you add more add or delete it’ll automatically update the same.

Excel Range Name is just a name assigned to a group of cells to help us make our working faster. I hope this article was helpful to you and explained you how to name a range in excel and different methods to do so.

If you have any questions or tips, I’d love to hear them in the comment section below.

How to Add Developer in Excel | 3 Quick Steps

How to Add Developer in Excel | 3 Quick Steps

Learn Vlookup, Pivot tables, What IF, Macro Automation, Power Query and much more.